The eyebrows play a significant role in the aesthetics of the face. The shape, fullness, and symmetry of the brows all work together to highlight the eyes and frame the upper face. If you have thin or patchy eyebrows, there is a non-invasive treatment that can instantly improve the eyebrow area: microblading.

Microblading is a popular eyebrow enhancement technique that improves the shape, definition, and thickness of the brows. The microblading technique uses a specialized hand-held tool with a unique blade to deposit dye into the second dermal layer of the skin, creating very fine strokes that mimic the appearance of natural eyebrow hair.

People often think microblading is a type of tattoo. While the techniques may sound similar, microblading and eyebrow tattooing are very different. Permanent makeup such as tattooed eyebrows may seem like a good, time-saving idea. Women with sparse or nonexistent brows may be swayed by the fact that permanent makeup can look at eyebrows without having to fuss with pencils and brushes. But permanent makeup is not without cons, and these should be carefully weighed against the pros before making a decision.Check out eyebrow tattoo page which has everything you might need near you.

The First And The Most Shocking Thing You Need To Know

The United States, as a whole, does not require any certification for someone to practice microblading on clients! Seriously, look it up.

Each state may have specific guidelines (and most do) for cosmetic tattooing (i.e. certification, licensing and insurance requirements).

But know that in the U.S. it’s the wild west. You have to look out for you first and as you’ll hear our experts say over and over do your research! That’s why this article will be an invaluable resource on microblading precautions.

At the end of the article, we’ll address the government’s lack of interest in pigment safety.

What Is Brow Tattooing?

In this method, the esthetician will use needles and will create a lot of tapping motions to penetrate the skin.

This way, they will place ink onto the skin, and the outcome will become more permanent.

Brow tattooing is usually a good idea if you want to create fullness and thickness in the middle of your brow, but is not recommended for brow definition.

#Also, tattooed brows will last you for a lifetime (as a normal tattoo would).

There are three different textures that you can choose when it comes to brow tattooing, based on your desire.Our exclusive range of eyebrow tattoo services  will help you in eyebrow microblading, feathering or hair stroke eyebrow tattooing procedures. 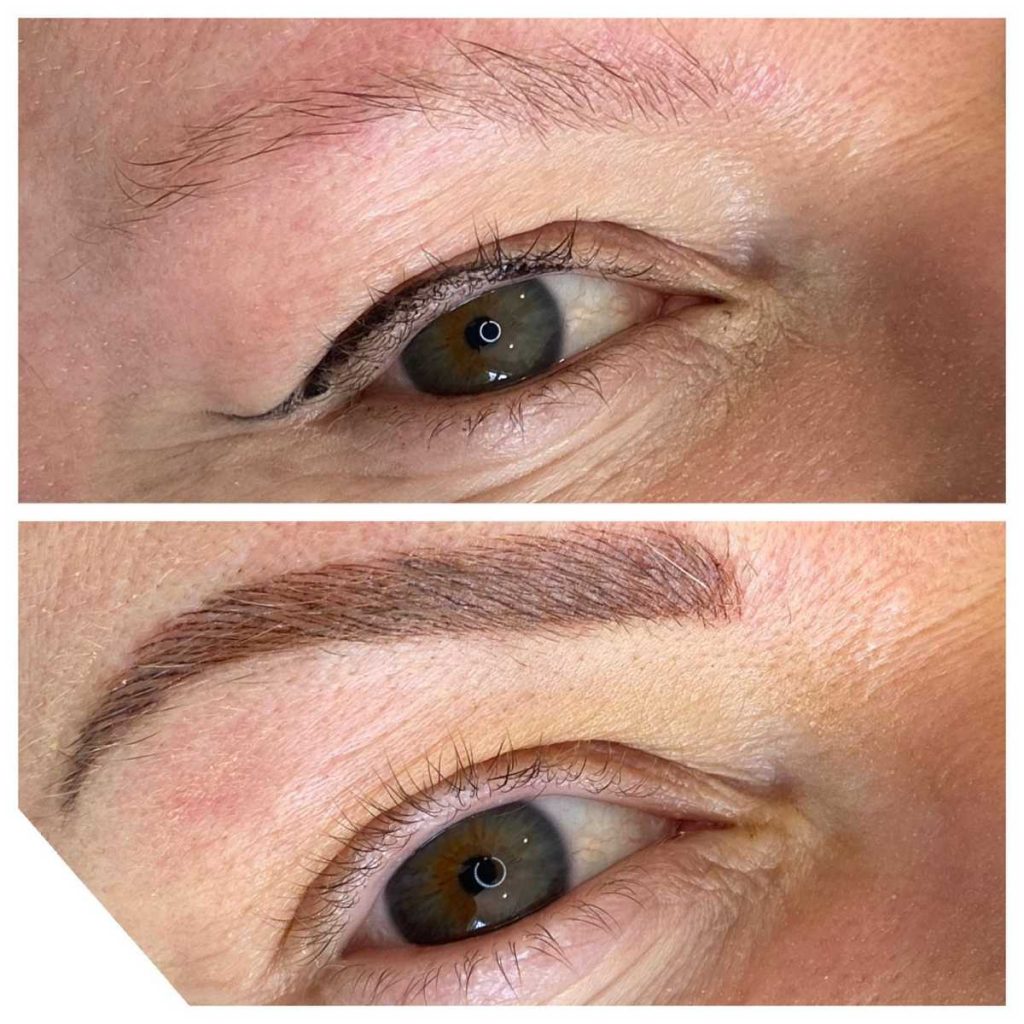 Eyebrow tattoos are pretty much exactly what they sound like – tattoo ink is used to fill in the shape of the eyebrow, giving a fuller and neater appearance. They are popular because eyebrows are an incredibly important part of facial appearance, potentially completely changing the entire face. For people with especially thin and sparse eyebrows, eyebrow tattoos can make a huge difference, and radically improve their appearance. It is difficult to overestimate the importance of eyebrows!

Eyebrow tattoos can be divided up into two types – temporary and permanent. Temporary tattoos are essentially a sticker placed over the brow area to give the impression of fuller eyebrows. They tend to last only a few days, and they are easily removable. This makes them very easy to try without any commitment, and it’s possible to experiment with lots of different styles.

Permanent eyebrow tattoos, on the other hand, are actual tattoos, done by a professional. They are likely to fade and change colour over time, and top-ups may be needed, but essentially they last for life, like any other tattoo. A good eyebrow tattooist will therefore be very careful to talk you through the process in great detail, and give you a chance to test mock-up versions of the eyebrows before even thinking about beginning the tattoo.

However, there are also disadvantages to eyebrow tattoos, and not all customers are happy with their new tattoos.

Why Should You Get Your Brows Done?

Eyebrows give a certain definition and dimension to the face while rounding up the entire makeup look.In the last two years, bushy eyebrows have become a huge trend, and women worldwide started to prefer them over funky 60’s thin eyebrows.See more of our  eyebrow tattoo services.

Unfortunately, not everyone is blessed with luscious brow hair, so sometimes, women turn to microblading or even brow tattooing. 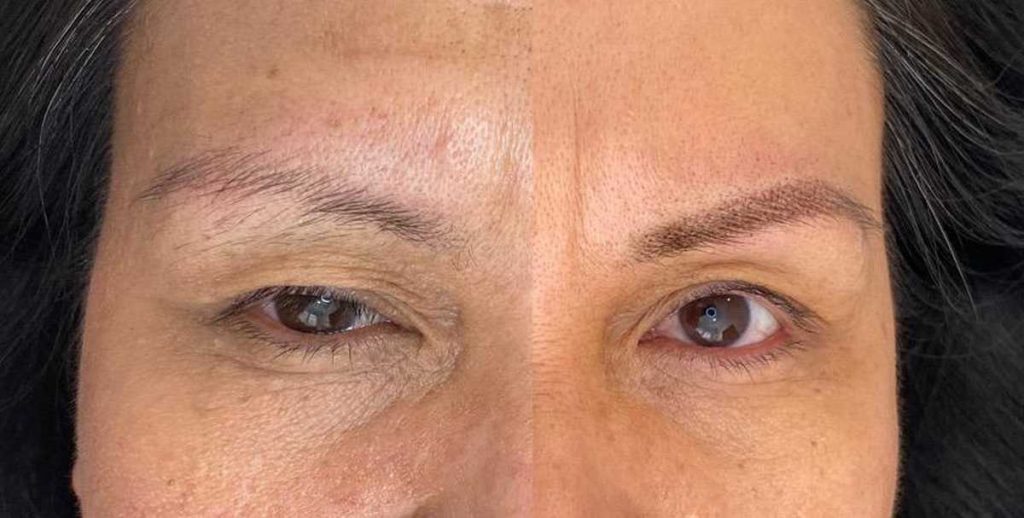 Some skin types retain ink better than others.

“Very oily skin types are the most difficult skin type to work with,” Tai explained. “They’re at risk of rejecting the pigment, and more concerning, they are prone to pigment hydration, which is where the pigment fans into each other, the strokes sort of blend and it ends up looking like a powder-filled brow more than it looks like distinct strokes.”

If you tend to scar or retain keloids very easily, you might not want to have this procedure. But Tai believes that even if your skin type doesn’t yield ideal results, it’s still a worthwhile enhancement.

The Difference In The Processes

The process itself is quite alike, but the main difference is in the fact that microblading is a hand drawing process, while tattooing is done with a machine.

Permanent makeup such as tattooed eyebrows may seem like a good, time-saving idea. Women with sparse or nonexistent brows may be swayed by the fact that permanent makeup can look at eyebrows without having to fuss with pencils and brushes. But permanent makeup is not without cons, and these should be carefully weighed against the pros before making a decision.Looking for eyebrow tattoo salon? Look no further,Cosmetic Tattoo by Rach got you covered.

Having your eyebrows permanently tattooed on can shorten your makeup routine. When you apply your brows with makeup, it takes time to draw them on with the eyebrow pencil and then fill them with eyebrow correctors. Tattooed brows remove that aspect of your makeup routine.

Anyone who has had a tattoo done can attest to the fact that it has a degree of pain involved. Having permanent eyebrows tattooed on the delicate skin above the eyes can be a painful process. However, the pain is short-lived, as the eyebrow area is fairly small and quick to do.

Permanent eyebrows are sought after because of the way they can define a face. A well-placed, well-shaped brow can make a face look thinner and more polished and even help to make eyes look wider. Some women may even choose to remove their natural brows altogether in favour of permanent ones that are easier to maintain and care for.

While the eyebrow shape that you choose today may be very much en vogue, changing styles may render your permanent eyebrows out of date and dowdy. Decades ago, perfectly shaped brows were the fashion, but the trends have changed and gravitated toward larger and more unkempt brows at times. Choosing one shape of the brow may be in fashion today, but not tomorrow.

Some women and men suffer from a condition called alopecia, which causes them to lose all of the hair on their bodies, including the hair from their eyebrows. Permanent makeup can help them to restore their eyebrows by giving the right colour and shape, helping to camouflage the condition.

Getting tattooed eyebrows could cause some infection and problems when you are finished. Some women develop keloids, or puffy scars, after having this treatment done. If you have a history of sensitive skin and scarring, this may not be a good choice for you. 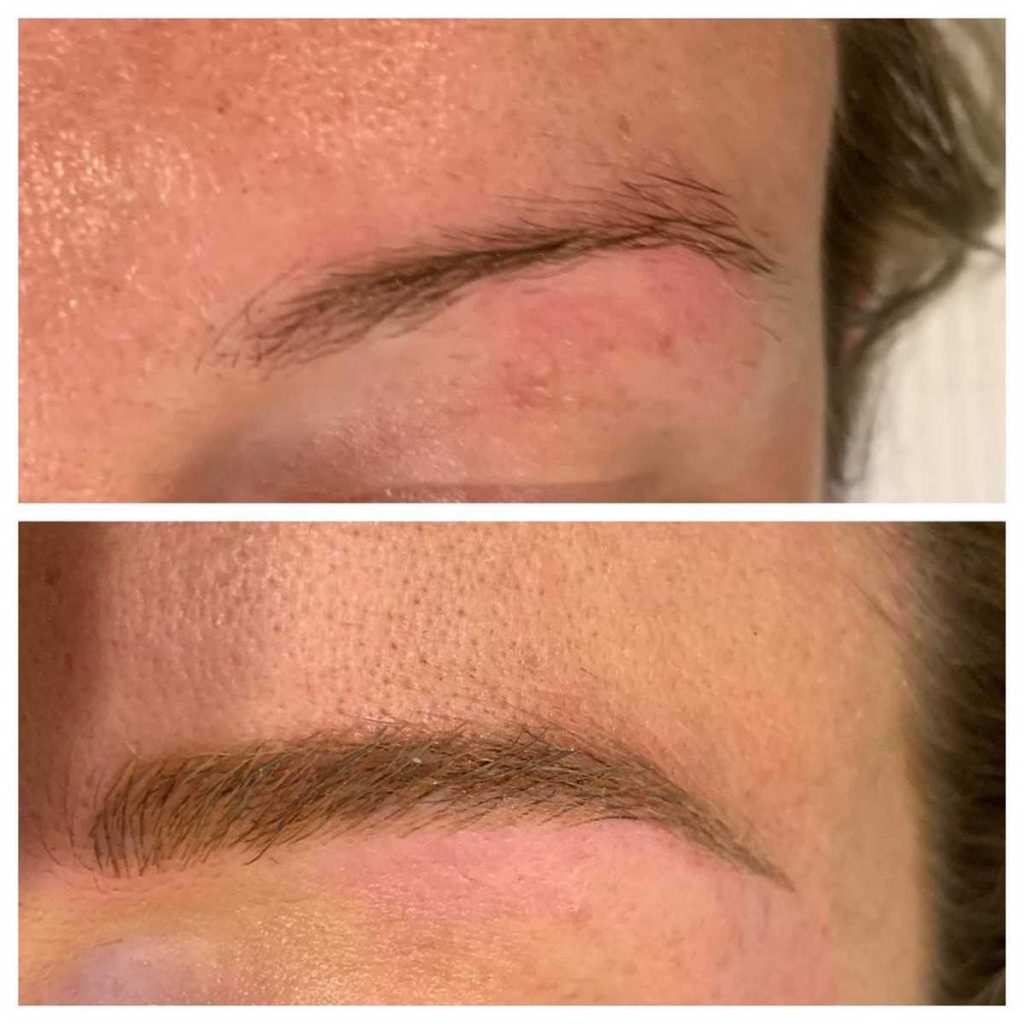 Microblading creates a more natural result compared to eyebrow tattooing, which results in brows that appear “drawn on” and flat. This is because the microblading technique creates individual hair-like strokes that are identical to the hair growth pattern of the surrounding eyebrow hair. A good microblading technician can make treated areas look like a more dense version of the natural brow hair.

While we covered hygiene, I’d be remiss if I didn’t also mention that there’s the potential that tattoo ink could be a toxic threat to your body’s health. Just announced in August of 2018, the European Chemicals Agency (ECHA) is assessing the risk cosmetic tattoo pigments may pose to human (and even environmental) health. And you know if the EU is only now getting around to this investigation, then it won’t be until the 22nd Century that the U.S. follows suit.

We’ll save the more in-depth look at tattoo safety for another article in the future though.

By now you’re probably super clear on all the ways to hedge your risks and get the best results from eyebrow microblading. It could just be the answer to your thin-brow woes!